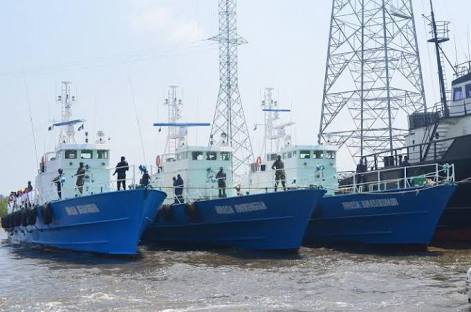 Maritime experts have expressed divergent expectations on the outcome of the recently deployed security assets by the Nigerian Maritime Administration and Safety Agency on Nigeria’s exclusive economic zone on the Gulf of Guinea.

While some believe that the deployment of NIMASA’s $195m assets would have a devastating effect on the inland waters, others described it as a welcome development.

The President of the Nigerian Institute of Shipping, Capt. Anthony Onoharigho, commended the security of the exclusive economic zone, but expressed grave concerns over the outcome “if commensurate effort is not made to secure the inland waters.”

He said, “What NIMASA has done is fine. But the same piracy problem could also happen on the inland waters because the spillover from the offshore will spill to the inshore,” he said.

“The problem in the country is enormous. These pirates are our people who are jobless. To clean that water, the government ought to first create an empowering environment, employ the seamen and remunerate them well. The amount being paid to Nigerian seamen is very low compared with any part of the world.”

According to him, Nigerian seamen should not earn less than what their international counterparts are earning because everything in the maritime industry is in dollars.

A Partner at Bloomfield LP, Mr Adedeoyin Afun, said he does not believe that the Deep Blue Project is only for the security of the exclusive economic zone only.

He said, “I think that you need to look at the strategy and the coverage of the Deep Blue Project. It is more of a reaction to curb armed robbery and maritime offences. It is wider than piracy and it will touch on our inland waters.

“If you look at it, they have cancelled the Secure Anchorage Area, which is in our waters. I want to believe that they have a strategy for maintaining, at least, the entrance of our waters and the anchorage where international ships berth.

“If you look at what happened in Somalia, it was the corridor that they secured. And that goes a long way. Creeks and others are far down the road because they are not charted territories; they are not navigable waters per se. That would warrant having marine police. But something we should look to in the long run.”

He added that the security agents to manage these assets should be provided standard operating procedures to guide the actions among the cooperating agencies.