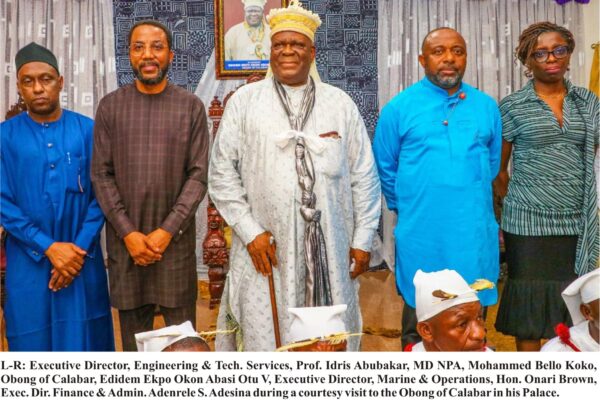 Against the expectations of many port stakeholders and users, the Calabar Port has generated over N5billion in revenue between January and May 2022 but the terminal operators have proposed a 30 per cent rebate for shipping liners to the Nigerian Ports Authority(NPA) as a veritable means of attracting more patronage to the port which has been challenged over the years by dredging controversy and the associated siltation peculiarity.

Meanwhile, the appointment of Engr. Mu’azu Sambo as the Transportation Minister is seen by some maritime practitioners as coming rather late and barely eight months to the end of the present administration’s tenure.

The Calabar Port is burdened with high siltation that makes it encumbered by maintenance dredging that is capital intensive, robbing it off all the potentials of a viable port with seamless connectivity to the hinterlands and the North-East market.

It has a draught of 6.2m in high tide, a huge limitation in the competitive world of the deep sea ports with over 16m draughts in low tides.

Recall that Vessels traffic into the Calabar Port Complex of the NPA, has increased in the last five months, according to the Port Manager, Festus Olumati who stated this during the official visit of the Managing Director of NPA, Mohammed Bello-Koko, penultimate Saturday, to Calabar Port.

According to Olumati, between January to May, 2022, vessel traffic into Calabar Port recorded high returns with huge corresponding increase in the revenue of the authority.

He said, “Within the period under review, ship traffic into Calabar Port recorded high returns. Number of vessels received were 72 while the Gross Register Tonnage (GRT) is 1,611,441 and a cargo throughput of 990,154.

“The cargo turn around time is 4 days per ship with 16 container TEUs and 15 percent berth occupancy.”

He, however, disclosed that the port generated $6.6m and N646m generated in local currency.

“Sir, it might interest you to know that these improvements in our modest efforts had a huge corresponding increases in the port’s revenue intakes. From January to May 2022, our revenue growth earnings increased as follows: revenue generated in dollars, $6.6million; actual revenue in dollars collected, $5.8million; revenue generated in naira is N646million and the revenue collected in naira is N309.2million

Speaking with MMS Plus, one of the concessionaires at the port said the revenue feat achieved at the port in the last five months excited the Managing Director of NPA such that the dredging of the port was becoming a secondary issue. This, he said happened at the stakeholders’ meeting in Calabar but they quickly reminded him in a unanimous voice that the port cannot function with dredging.

“A 300 TEUs vessel cannot come to Calabar channel, it means that it has to be less than 300 TEUs and if it is less that capacity it will not make economic sense. It will not be profitable, looking at the fact that they have to pay bunkers, pay crew and feed them, pay port cost, among others. And that is why we are urging them to introduce rebate in the interim, which will be like a palliative pending when the dredging is done,” he said.

They called for 30 per cent rebate as against 10 per cent earlier given by NPA.

The stakeholders who spoke with MMS Plus in separate interviews, noted that Engr. Sambo with his wealth of vast experience as a maritime practitioner would have been most suitable for the job and would have done great  if he had been appointed earlier, since he knows the industry very well.

In his reaction to the new minister’s appointment, President of the Ship Owners Association of Nigeria (SOAN), Dr. Mkgeorge Onyung wondered why Engr. Sambo was left out for seven years. “We know his qualifications, but my worry is why did they leave him out for seven years? He would have done us a lot of good. I’m not saying that those who worked did not do well, but he would have done great”, Dr. Onyung stated.

He said people should allow the new minister to settle down rather than forming opinions that may not count in the end.

In his words: “Why are we reacting? The man has not even settled down, so why should we start reacting? We should allow him to settle down because he has works to do.

“For me, I don’t think we should start to react. He has been a minister before. So he is in the cabinet. He understands the situation in Nigeria,” he noted.

He said if the government in its wisdom brought him in at this time, they obviously have a template as to how to run the economy. He said people should allow the new minister to settle down, understand what he has to do and hit the ground running.

He said he doesn’t want to engage in any opinions now, stressing that “When we meet him, we will let him know our opinion.”

Dr. Onyung however cautioned against hasty opinions as these may unsettle the minister. He noted that the responsibilities before the new minister are huge.

“There is work to do. But I don’t want to begin to form an opinion, when the man has not settled down. There’s opinion you will form now, you’ll disturb his job. He has a job to do. Let him sit down and do the job. He knows what to do. All we need to do is to welcome him and not to begin to form opinion because your opinion will not count,” he said.

When asked for her reaction to the appointment of the new minister, the President of Women in Maritime Association, Nigeria (WIMA), Mrs. Rollens Mcfoy, who expressed surprise over the redeployment of former minister Sen. Gbami Saraki, said “No comment”.

Reacting to the appointment of Engr. Sambo as the new Transport Minister, President of Association of Maritime Truck Owners (AMATO), Chief Remi Ogungbemi also noted that the appointment was good, but came a little late. He also decried the redeployment of Gbemi Saraki, former minister of transport, stressing that he would have loved a situation where the immediate past transport minister was allowed to continue. He said his association will give all necessary support to the new minister.

The AMATO President however set four agenda for the new minister particularly as it concerns his association.

“The new minister should ensure that the working environment is conducive for everyone. He should attend to the challenges confronting the industry especially my constituency, which is the truckers. Let him look into the challenges we are having with the Nigeria Customs Service (NCS) and also look into policies that are inimical to the survival and stability of truck operation in the maritime industry,” he said.

Stating further, Ogungbemi noted that the truck owners are having difficult time maintaining their trucks and therefore urged the new minister to come to their aid.

“He should also assist through the National Automotive Council (NAC) to see how we can access a soft loan that we can use to take care of our aging trucks,” he said.

Ogungbemi called on the new minister of transport to look into the poor condition of the port access roads. “The major roads that enter into the port are in bad condition. Therefore let the minister liaise with his counterpart in the Federal Ministry of Works and Housing and do urgent palliatives on the two major roads that lead to the ports because the port is the gateway to the nation’s economy and it’s supposed to be the best road in Nigeria. If you watch from Tin Can to Mile 2, the road there has collapsed, and if you also look from Ijora to Costain, that portion of the road has also failed, totally. That’s why you see containers and other general cargo falling. So these are the four agenda AMATO is setting for the new minister.”

In his own reaction, a terminal operator lauded Engr. Sambo’s appointment, describing it as a good choice.

He noted that the new minister being an industry person will not encounter much difficulty learning the industry.

He opined that where the problem might lie is the ability to have the political will to do the needful, which according to him is a major challenge.

The terminal operator however lamented the redeployment of the former minister of transportation, Gbemi Saraki, stressing that all the three and half years of tutelage under former transportation minister, Rotimi Amaechi, should have positioned her as the substantive Transportation Minister.

“Though, one would have normally expected that the former Minister of State, having been in tutelage for three and half years, should have had the opportunity of graduating to become the substantive transport minister. It means all she learnt in the last three and half years is a waste,” he said.

According to the operator,” Those experiences would have helped as the substantive minister”, stressing that having represented the former minister of transport, Rotimi Amaech, in different fora, “I felt that would have made her get acquainted with the industry, which if now she is put as substantive minister would have done very well. But the President knows more or better”, he concluded.

Reacting to the development, the former President of National Associations of Government Approved Freight Forwarders (NAGAFF), Dr. Eugene Nweke urged the new minister to revisit the issues on ground at the port because he has less than eight months to stay.

“It is good that we have a maritime person but unfortunately, he has less time to stay and so, cannot have a long time agenda for himself.

“He should put immediate measures to make things work in the port, stamp his authority with his wealth of experience and address congestion at the seaport”, he said.

Nweke advised Sambo to make the Lekki Deep Seaport his major priority by ensuring its quick take off amongst other contentious issues in the port.

Recall that President Muhammadu Buhari had in a minor cabinet reshuffle, sworn in seven new ministers and moved Sambo, former Minister of State for Works and Housing to the Ministry of Transportation as substantive minister. Prince Ademola Adegoroye is the new minister of state for Transportation.

The Federal Ministry of Industry, Trade and Investment, on Monday, launched the Nigeria Trade …