Despite the drop in piracy incidents in Nigeria which is attributed to the Deep Blue Project, the Minister of Transportation, Hon. Rotimi Amaechi has expressed contrary views stating that the project hasn’t started working in line with the desired goals.

The Minister of Transportation, Amaechi, said on Friday while flagging off the National Wreck Removal exercise in Lagos, with a declaration that the maritime sector was being opened up for great investment opportunities with the exercise.

Amaechi opined that although piracy incidences have reduced in the nation the problem of oil bunkering and other illicit activities are still prevalent on the nation’s waterways.

“Do you think the Deep Blue Project is working? No! It’s true that piracy has gone down; but the country is still suffering because illicit activities in the oil sector continue. Those into oil bunkering are still going about their businesses,” he said.

Amaechi, however, extolled the Director General of the Nigerian Maritime Administration and Safety Agency (NIMASA), Dr. Bashir Jamoh, for the initiative, saying, “This creative venture of clearing our waters of wrecks and derelicts, apart from guaranteeing better safety of navigation, opens up the prospects of many new investments in the maritime industry. This would tremendously help the Federal Government’s economic diversification drive and enhance Nigeria’s standing within the global maritime community.”

Earlier, the NIMASA boss had relayed the concerns of the most maritime stakeholders as he noted that the Minister’s focus has been more on the railway sector with little attention given to the maritime industry.

In his response, Amaechi said; “I don’t agree with the NIMASA Director-General that I don’t pay attention to maritime. As the Minister of Transportation, you can’t say that I am not giving attention to maritime because that isn’t correct. My job is to supervise and coordinate all the agencies in the ministry. So, whatever the Managing Directors bring forward is what I take to the cabinet.”

The Minister stressed the autonomous status of each of the agencies under the Federal Ministry of Transportation, stating that all the heads of the agencies are appointed on the basis of competence and expertise. He said he would always support imaginative ideas from the Chief Executives.

Speaking further, the Minister lamented that the maritime sector is largely uncoordinated. “How many groups within the maritime sector are united? From the maritime press, I had to fight a battle with them to get them together; but they said no. The situation is the same with the ship-owners and I have a short attention span with such conflicts. I choose to move on to something else. It is also in the Nigerian maritime sector that we have ship owners that don’t own ships.”

Amaechi stressed that when he became Minister of Transport, his first attention was on maritime as he collaborated with ship owners and the industry, and took them to Singapore to get partners for a national carrier.

“The clause for 60 percent Nigerian stake and 40 percent foreign inputs is a hindrance. Initially, I was very naïve as I led operators to Singapore to get foreign investors who will bring 40 percent. We got investors who were willing and able to bring the 40 percent stake but Nigerians couldn’t come up with the 60 percent. So, there is a dire need for the National Assembly to amend that law. Anyone who has money to acquire vessels to operate in Nigeria should be given the Nigerian flag. Maritime sector has a lot of problems. There are several structural problems because people make huge monies from the illegalities in the system. They wouldn’t allow the Ministers to succeed. I’m the first Minister that has fought such operators and finished my tenure. Nevertheless, I am going to sit with maritime stakeholders again; but don’t forget that I have sat with them several times in the past. When I see that things aren’t moving forward, I would leave,” he added.

In his goodwill message, the Executive Director, Finance and Administration, Hon. Chudi Offodile lavishly thanked the Transport Minister and implored him to also extend his tenacity and drive towards the speedy disbursement of the Cabotage Vessel Finance Fund (CVFF).

If maritime stakeholders, especially ship-owners present had thought Amaechi would take the plea to heart for interest of the sector, the Minister’s response was a debacle as he said, “NIMASA is looking for my trouble. The President gave an approval for the disbursement of the CVFF even though the Director-General of NIMASA is denying that the agency never participated. NIMASA kept going around until that approval was withdrawn. Now, they are asking me to go and fight again. Should I fight? My answer is no!”

“I fought for more than two years before they gave us approval. When it got to time to disburse we started having troubles until I woke up one morning and discovered a directive was made that they have withdrawn that approval. I can’t fight again.”

Jamoh said the successful removal of the wrecks and derelicts would restore confidence in Nigerian waters, and eliminate obstacles to smooth, safe, and profitable navigation. He thanked the Minister for pushing the wreck removal idea through the Federal Executive Council (FEC).

Jamoh said the commencement of the wreck removal exercise was another milestone in the incremental achievement of the Triple S strategy of the current Management of NIMASA, anchored on Maritime Safety, Maritime Security, and Shipping Development.

The Director General stated, “These wrecks inhibit the operation of shipping companies, which constantly strive to increase efficiency in order to remain in business. As a result, most of the shipping companies usually avoid operating or investing in areas where navigational hazards are identified due to high insurance premium charges.”

He said with the elimination or reduction of the costs associated with insurance, survey and charting of wrecks, the cost of shipping would drop, to the benefit of mariners and other stakeholders in the maritime industry.

Also speaking at the event, the President of Ship Owners Association of Nigeria (SOAN), Dr. Mkgeorge Onyung commended Amaechi for his efforts in shipping even as he implored the Transport Minister to pay more attention to the nation’s maritime sector.

“When ships die there is no place to bury them. Now that we have found good use for shipwrecks, we want to use this opportunity to state that we could channel efforts towards getting new ships in order to ensure that the nation’s shipping industry can be at par with global best practices,” he said.

Onyung noted that freight charges for taking a container from China to Nigeria is over $15,000, adding that the top eleven international shipping companies made a profit of $19billion in the first quarter and $28billion in the second quarter of 2021.

Given these figures, he argued that Nigeria shouldn’t continue to remain a spectator while other nations earn colossal sums from shipping business. 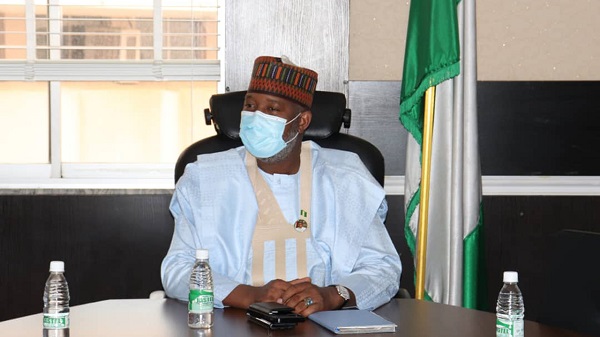