Men of the Nigeria Customs Service, Ogun Area Command 1, have intercepted a police van loaded with contraband after it escaped from the Idi-Iroko border in the Ipokia Local Government Area of the state.

The Customs Area Controller, Bamidele Makinde, disclosed this on Tuesday while briefing journalists on the 142 seizures the command made within the 33 days he assumed office in Abeokuta, the Ogun State capital. 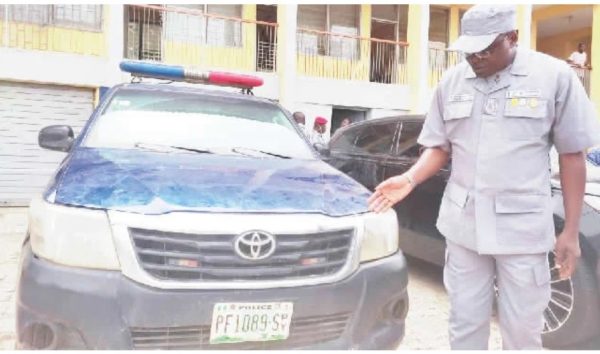 He explained that the driver of the vehicle, who was in mufti, escaped from the Idi-Iroko border, but was intercepted along the Alamala Baracks Road, near Imala, Abeokuta.

Makinde said the driver, after sighting his men, abandoned the van and fled.

The controller said though he could not authoritatively say the vehicle belonged to the police, he posited that the number plate on the van with siren confirmed the claim.

Asked if the van would be released to the police, Makinde said the decision would be taken by the Customs headquarters in Abuja.

He said, “As it is, it will be communicated to Abuja. The NCS headquarters has the final say on what happens to it. If it is found to be a police vehicle, it is only Abuja that can release it to the police authorities.

“It is supposed to be a security vehicle, but it was used to smuggle 27 bags of rice. The driver suddenly parked and ran away, abandoning the van.”

The state NCS boss also disclosed that the command impounded 5,420 bags of rice between February 9 and March 21.

However, the Ogun State Police Public Relations Officer, DSP Abimbola Oyeyemi, in a statement, denied that the van belonged to the police.

He said, “To start with, the number plate on the vehicle, which is PF 10889 SPY is not a police number plate, as no police vehicle will be numbered in such a manner.

“The Nigeria Custom Services, which has unfettered access to the top echelon of the police command, would have contacted the command for information about the vehicle before labelling it as a police vehicle in their press briefing. More so that nobody was arrested with the said vehicle to give credence to their claim.

“The command hereby wishes to inform members of the public that the said vehicle is not a police vehicle and the number plate on it is fake; the police have nothing to do with it.”