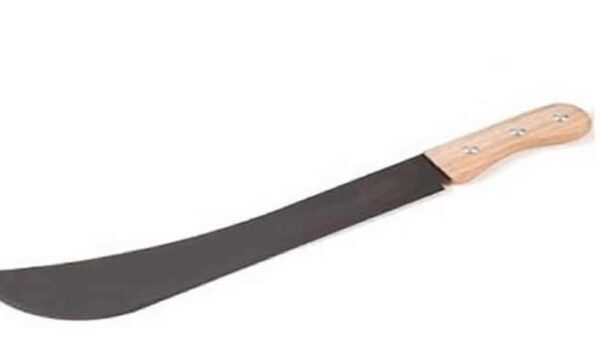 The Nigeria Customs Service has intercepted 3,116 cutlasses coming from Ghana.

The interception took place at Idiroko area of Ogun State, with the value of the seized items estimated at N9. 348m.

Addressing journalists at the unit in Ikeja, Lagos, recently, the Acting Customs Area Controller in charge of the Federal Operations Unit Zone A, Hussein Ejibunnu, said that the cutlasses were hidden in a hut somewhere at Oja Odun area of Idiroko when the officers intercepted and seized them.

He said that the importation of things like that required an end user certificate which was obtained from the office of the National Security Adviser, noting that 11 suspects were arrested in connection with some of the seizures and were at various stages of investigations.

“The cutlasses were hidden inside a hut when it was discovered. And the importation of things like this requires EUC from the Office of the NSA and now that we are approaching the electoral period, we need to be skeptical about it. When I was contacted, I ordered the officers to cordon the whole place and evacuate everything and up till now nobody has come for it.

“Nobody lives there; it’s not a habitable area. So, it is like the person bringing this must have been doing it or is about to start the business and is keeping it there. They are new cutlasses. As a matter of fact, we are in an election period and we need to fortify the nation to ensure that items that are dangerous don’t come in. You can imagine someone bringing in this. If it was for trade, he would have known the way and manner to go about it.  No one has been arrested for this.”

According to him, “These seizures were made along the border and port corridors within the Southwest Zone. This achievement was possible with the enabling powers of Section 158 (power to patrol freely), sections 160 – 163 (failure to pay duty on demand, untrue declarations, counterfeiting documents, false scales amongst others of the Customs and Excise Management Act, Cap C45 Laws of the Federation of Nigeria, 2004 as amended,”  he concluded.