The Zonal Coordinator, Zone A, Nigeria Customs Service (NCS), ACG Modupe Aremu has charged the newly promoted officers to show a high level of diligence and professionalism in their future assignments to justify the confidence reposed on them by the Customs management.

ACG Aremu stressed this while performing the official decoration of officers of the ranks of Comptrollers, Deputy Comptrollers and Assistant Comptrollers within the zone in Lagos today.

Describing the recent promotion process as a painstaking one, the ACG stated that those selected for promotion merited and deserved it, having gone through the strict processes and emerged successful.

Her words: “I was at the headquarters, Abuja during the selection processes for the promotion and I can confirm to you that it was truly painstaking, and so for your to have emerged successful means you deserve it. This should also serve as a morale booster for you to appreciate the management for your elevation to the next rank.”

“You must at all times cultivate and exhibit the virtues of hard work, diligence and professionalism. You must be dedicated to duty because only these could see you through. I must say that your promotion is well-deserved and so we are proud of your success and on behalf of the Comptroller General and the entire management team, I congratulate you all”, she said. 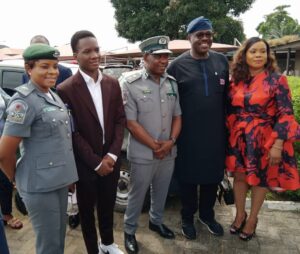 He noted that the basis of the promotion isn’t just knowledge, but other indices such as capacity, human relations, ability to contribute to the work environment.

“It is not that I’m far better than others, but I’ve always someone who adds value at every level throughout my Customs career. I’ve been PRO at Apapa and at the Zonal level. I was there during the transitioning of the seaports from Nigerian Ports Authority (NPA) to private operators. I was also there during the transforming of Customs processes from Asycuda 1 until the present NICIS II platform.”

“E-Customs is a very beautiful concept and I recall been a member of the team when we started implementing the first electronic payment I’m Customs. The first time scanners were brought into the ports, I was also part of the team to assure people that there was no need to be scared. Today, scanners are one of the key elements of trade facilitation at the ports,” he said.

Nnadi, however, encouraged those who expected to be promoted but didn’t get it this time to keep their head high and go about their duties diligently until the next promotion, adding that the current Customs administration isn’t skewed to leave anyone disadvantaged.

On her part, the Zonal Public Relations Officer, Nkiru Nwala who was also promoted to Superintendent of Customs, noted that the promotion should spur officers to be more diligent and industrous, as the promotion comes with more responsibilities.

“I’m encouraged and excited to do more with this promotion, but I’ve always projected the Customs Service as a Public Relations Officer in a manner deserving of the efforts put in by Customs officers. Most of the revenue collected by NCS comes from Zone A, and so do the most of the challenges. As the Zonal PRO, I’m resolved to continuously project the Service in good light, encourage officers, report the activities and create a robust working relationship between the media and other stakeholders,” Nwala said.