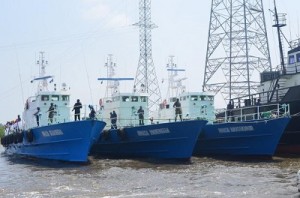 Amid the COVID-19 pandemic some Nigerian seafarers have been found onboard vessels without Personal Protective Equipment (PPE) and medicament.

The Vice President of the Association of Marine Engineers and Surveyors (AMES) Engr. John Oguntokun revealed this during a recent webinar organized by the Mission to Seafarers (MTS) in Lagos, with the theme “Seafarer welfare: Are we missing the boat?”

“When doing hull inspections, in some cases we found that seafarers onboard vessels were without PPE and necessary medicament. Safety should be sacrosanct and MTS should endeavour to make the work environment better for seafarers,” he said.

Noting that the practice of seafaring sees seafarers suffer from fatigue and depression, he stated that the situation has been exacerbated by the COVID-19 pandemic.

He stressed the need for maritime regulatory agencies especially the Nigerian Maritime Administration and Safety Agency (NIMASA) to ensure safe and secure shipping on the Nigerian waters.

Her words: “We are bothered about the lack of safety in our waters. If anything happens now, who goes to search and rescue? We have lost several seafarers to piracy and we inherit their wives and children. Hence, we continue to call on the security agencies to address this menace. There have been cases where seafarers are thrown into cold-rooms and frozen to death. How did these investigation end?”

Meanwhile, in a bid to ascertain who wields authority and should be culpable for maritime crimes onboard vessels, Nigerian shipping experts intend to establish a distinction among seafarers.

Speaking at the virtual meeting, the President of Nigerian Maritime Law Association (NMLA), Mr. Chidi Ilogu (SAN) stressed that there was a need to have this distinction as some seafarers have been held culpable when they couldn’t have asserted any authority in the crimes.

Chief Adebayo Sarumi, former Managing Director of Nigerian Ports Authority (NPA) and Chairman, MTS Lagos, corroborated this and assured that MTS would work closely with the NMLA to address this as well as other issues concerning seafarers.

Meanwhile, the Director General of NIMASA, Dr. Bashir Jamoh assured that the new Anti-piracy law would quell the menace of piracy on the nation’s waters.

Jamoh, who was represented by the Director, Maritime Labour Services, Mr. Ibrahim Jibril, assured that the agency is committed to protecting seafarers’ welfare even on occasions when they are being criminalized and imprisoned for issues beyond them.

“It is unfortunate that the activities of pirates and criminals on our waters greatly affected seafarers over the years and unfortunately nothing has been done about it to the extent that our seafarers are being criminalized or even imprisoned. With the anti-piracy law, there will be succour for seafarers in Nigeria as we’ll be able to address these criminal activities that are happening on our waters properly in the court of law. We believe it is through this medium that the seafarers will be protected,” the NIMASA boss said.

However, the Chief Executive Officer, Starz Group, Engr. Greg Ogbeifun admonished MTS Lagos to address the fears of foreign seafarers, noting that most sailors perceive security challenges and traffic gridlock in Nigeria hence they remain onboard the ships.

“Foreign seafarers are afraid to come onshore in Nigeria because they perceive safety issues and traffic gridlock that may keep them from getting back to the ships on time. These people want to see the artifacts in the country but these fears following the disposition in the international media keep them away. MTS should play the role of giving them confidence via escorts or assistance,” he said.

Ogbeifun also called on the maritime agencies in the country to provide the requisite funds and equipment to assist MTS, even as he stressed that ship owners in the country should also make contributions to MTS.