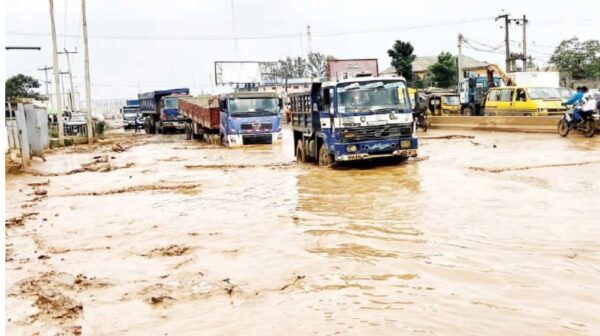 The deplorable condition of the Sango-Ota end of the Lagos-Abeokuta Expressway, Ogun State, has continued to compound the woes of residents and business owners in the area.

A media correspondent, who visited the area on Thursday, observed that the road had collapsed.

Motorists and commuters had a hectic time plying the route.

The almost three-kilometre stretch of Joju, immediately after the Sango-Ota Bridge inward Ifo, was abandoned.

The road was dotted with large potholes lodged with water.

Both trucks and vehicles were forced to connect to the other lane, as they faced oncoming vehicles only to connect back to their lane at the Igbala end of the road.

Motorists expressed fear that the available lane might soon get damaged due to the high volume of traffic in the axis.

It was also a similar sight at the Toll Gate end of the road, where the lane connecting motorists from Alakuko inward Ogun State, had also been abandoned.

Only a few vehicles were seen meandering through the section of the road ridden with potholes.

A gully lodged with water could also be seen at the end of the axis.

Most of the motorists resorted to plying one way, including a police patrol van.

Our correspondent learnt that the vehicles driving against traffic had knocked down commuters several times.

The deplorable condition of the road had also become an avenue for street urchins to extort money from commercial drivers.

Checks by our correspondent revealed that the road had paralysed economic activities in the area.

At least two filling stations and some other business outlets along the axis were shut down.

A business owner, Abdullahi Sanusi, said, “We are tired of complaining. Almost all the businesses on this side of the road have been paralysed. We are only living by God’s grace. As you can see, I sell tiles, but my customers rarely patronise me these days. They prefer to buy somewhere close to their area whenever they think of the stress of coming here.”

A trader, Afolabi Lawal, who sells plank at a sawmill close to the Joju end of the road, said he had been experiencing low patronage.

He said, “Our sales have reduced in the past few months since the road got worse. There was a time vehicles were still managing the road, but not any longer since their vehicles started to break down.”

Motorists also complained bitterly about how the road had damaged their vehicles.

The supervisor in charge of the Lagos-Toll Gate section of the road, Wale Adebote, said the Federal Government had not abandoned the road.

He said, “We are coming back to the road. The problem we have in that area is that every space of land has been sold. Everywhere is fully developed and the water accumulated on that axis comes to the lowest point. But a redesign has been undertaken to take care of that problem. The contractor has been moved out of site, but they will soon come back. We aim to deliver the road by the end of the year, and that is what we are working on.”