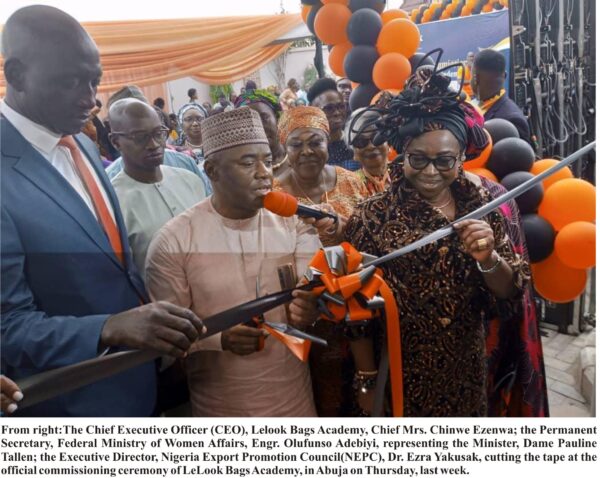 The priority agenda of  President Mohammadu  Buhari’s vision of taking 100 million Nigerians out of poverty in the next ten years  found a deep expression in the LeLook  Bags Academy state- of – the- art centre for the acquisition of bag making skills to empower women/girls and the youths in Africa.

The ultra-modern skills acquisition Academy in Abuja was officially commissioned on Thursday, last week amidst fanfare by Minister of Women Affairs, Dame Pauline Tallen,;Minister of  State, Works and Housing, Mallam Mu’azu Sambo; and  the Nigerian Export Promotion Council(NEPC), with the presence of many other ministries, agencies of the government and international development partners and private sector operators.

Speaking at the event, Tallen represented by the Permanent Secretary in the ministry, Engr. Olufunso Adebiyi, said,”I am confident that the LeLook Bags Academy will support us in addressing the endemic unemployment in our society today, as well as provide  a functional and creative environ for women and girls to enhance productivity and  the narratives for women  and girls in national development”.

Assuring that the Ministry will continue to support the initiative by ensuring that women and girls are sent for training and empowerment, she called on Nigerians to support the growth of the Academy by sponsoring participants to benefit from the training.

Tallen added that at the Federal Ministry of Women Affairs the brand LeLook finds meaning as a true representation of what the indomitable entrepreneurial spirit of the Nigerian woman can bring to the table . She testified  that the bags produced by LeLook are of international standards and form a major part of their souvenirs given out to local and international partners.

The Permanent Secretary in his personal message at the occasion regretted that women’s representation in appointive positions and across many professions in the country is abysmally low but noted that the personality of Mrs. Ezenwa who has dared the odds to contribute her quota in putting Nigeria on the spotlight of emerging women entrepreneurs spews  hope that changes could take place with dedication and focus by women.

According to him, “In Nigeria’s population, 49.6 per cent are women. In the political setting, appointments are such that the appointment of women is less than 10 percent. Even in the medical profession, the percentage of women there is about 2 to 3 percent.

“In Engineering, the percentage of women is 20 to 23 percent. In the legal profession where we thought women are many, we found out that they are just about 37 per cent.  Female students are 49 percent, while in the military women are less than 6 percent.

“However, I went through my statistics and found that the causes of this gender disparity skewed against women are, social norms, cultural problems, religious sentiment, self- defeat, among others.

Recalling that the Academy was founded to help reduce the incidences  of vulnerability for women and girls, Adebiyi  did not only call for support for victims of gender based violence but narrated an emotional driven story of a victim his wife  assisted to restore her dignity as a woman.

“Let me tell you a very short story. I used to follow my wife to Dei-Dei market in Abuja. And there is this young girl we met who sells pepper, onions, tomatoes, and all that. But one thing that struck our attention to her was that we over paid her one day  and she immediately returned the excess. And my wife said, “Do we still have this kind of persons  in Nigeria?”  My wife picked interest in her. It got to a point where my wife no longer go to the market herself. She would call her and send her money to buy things of choice for her and bring home. With time we discovered that she could speak English very well and my wife asked, ’why are you here?’

“Following this, we discovered that she was violated while in secondary school and got pregnant in the process and was delivered of a baby. And we asked if she could go back to school. She consented to it. And we advised her to leave the market, and drop the child for her mother. She did and we sent her back to school. Six years later she came back home with a First Class. I just wanted to say that there are many women who would have become exceedingly great but were violated, abused and all that.  Can you imagine if Dr Mrs. Ngozi  Okonjo-Iweala had been abused in secondary school, the world would have missed such an intelligent figure on the global scene; imagine if my Minister and Madam, Pauline Tallen was violated as a child, we would have missed her  intelligence  at the office. We don’t know the magnitude of what Mrs Ezenwa has done today for women and this country. Let’s always support the victims  of  abuse amongst us and give them chance to live again.”

In his goodwill message, the Executive Secretary of NEPC, Dr. Ezra Yakusak, commended  Mrs Chinwe Ezenwa for her vision and commitment for embarking on a project of this magnitude that is helping the nation in export and  drive for  diversification of the economy, job and wealth creation.

“Therefore, it is commendable that LeLook has bridged this gap by  providing opportunities for  youth employment through the production of quality bags for domestic market and  more importantly for export. This project is important to the Nigerian Export Promotion Council (NEPC) because it is a huge testimony of how NEPC’s direction has significantly guided Small and Medium Enterprises( SMEs) in the country to growth. It may interest you to know that we identified LeLook at its inception and guided it through our assessment sessions”, he stated.

Speaking at the event, the founder and CEO of LeLook Bags Academy, Mrs Chinwe Ezenwa, who stated that the Abuja Academy is a replication of what she had done in Enugu and Lagos,said the Academy is focused on the strategic direction – to empower and make women/girls and youths to be self-reliant manufacturers, designers and entrepreneurs in bag making, to build and  strengthen entrepreneurial capacities, and to reduce incidences of vulnerability for women and girls, some of whom are victims of gender based violence and harmful practices against women and girls.

According to her, the Academy also has the goal to buy into the Federal Government’s policies of promoting non-oil exports, promote the development and diversification of Nigeria’s export  and produce for local consumption.

She told MMS Plus that Nigerians can now leverage on this bag making skills to make impact in the African Continental Free Trade Agreement (AfCFTA) in Africa as the Academy is the first in Africa and the brand is of international standards.

A Multi-purpose Co-operative Society, she said has also been founded to support staff of the Academy and graduants to help them set up, start off and sustain their own businesses in bags making.

In her good will message, the United Nations Population Fund(UNFPA) President, represented by  Miss Ulla Mueller said that UNFPA would continue to extend its partnership to the academy through their survivor- centered approach to Gender Based Violence programming which priorities the rights ,needs and wishes of survivors as well as provide  them access to information and skills to improve their livelihoods, improve their ability to make decisions  and give them a greater voice in public and private spaces.