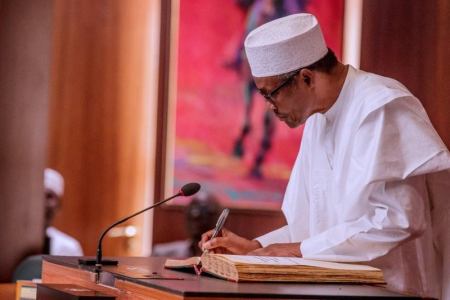 The President, Major General Muhammadu Buhari (retd.), on Thursday signed the country’s 2021 Appropriation Bill and 2020 Finance Bill into laws, thereby enabling their implementation to commence by January 1, 2021 and ensuring the continuation of the January-December cycle.

In signing the N13.59tn budget, however, Buhari said he was aware of the changes the National Assembly made to the proposal he submitted.

He said his regime would examine the changes and,where necessary, approach the lawmakers with a request for amendment, virement or other appropriate adjustments.

The President signed the document at a brief ceremony held at the Council Chamber of the Presidential Villa, Abuja and witnessed by Vice-President Yemi Osinbajo; leaders of the National Assembly and federal executive council members.

The National Assembly had last Monday passed the appropriation bill, raising the total estimates from the proposed N13.08tn to N13.59tn, an increase of over N500bn.

Buhari had on October 8, 2020 laid the money bill before a joint session of the National Assembly.

In signing the document, Buhari said, “The 2021 Budget that I have just signed into law provides for aggregate expenditures of N13.58tn, representing an increase of N505.61bn over the initial executive proposal.

“The increase, however, includes the N365bn provision for upscaling the Nigeria Social Investment Programme, which I requested for after laying the budget before the legislature.

“The details of the budget as passed by the National Assembly, and signed into law by me, will be provided by the Minister of Finance, Budget and National Planning, subsequently.

“In designing the 2021 budget, we deliberately chose to pursue an expansionary fiscal policy. As you are all aware, our economy recently lapsed into its second recession in four years.

“I mentioned during the presentation of the 2021 Appropriation Bill that we intend to use the budget to accelerate our economic recovery process, promote social inclusion and strengthen the resilience of the economy.

“All ministers are to ensure that their supervised ministries, departments and agencies achieve the objectives set for their sectors.

“I am aware of the changes that the National Assembly has made to the 2021 Executive Budget proposal.

“We will examine these amendments and, where necessary, I will revert to the National Assembly with a request for amendment, virement or other appropriate adjustments to ensure that the core objectives of the budget are accomplished.”

The President noted that in spite of the adverse impact of the coronavirus pandemic on the nation’s economy and government’s revenues, his regime made appreciable progress in the implementation of the 2020 budget.

He added, “As at December 2020, we had released about N1.75tn out of a total of the N1.96tn voted for the implementation of critical capital projects, representing a performance of about 89.1 per cent.

“The overall performance of the 2020 budget currently stands at an impressive rate of 97.7 per cent.

“The Minister of Finance, Budget and National Planning will provide further details on the 2020 Budget’s performance, in due course.”

Buhari described the 2021 budget as critical to the delivery of the legacy projects of his regime.

To fully achieve the objectives, he said, the effective implementation of the 2021 budget was imperative.

Buhari said his regime was intensifying domestic revenue mobilisation efforts so that it can have adequate resources to fund the 2021 budget.

He therefore asked revenue-generating agencies to work hard to meet their targets while threatening to sanction the heads of defaulting ones.

Being a deficit budget, the President said he would be sending the specific borrowing plan to the National Assembly soon.

He however promised that all borrowings will be judiciously utilised.

Speaking on the specific borrowing plans to be forwarded to the National Assembly and the use of over N3tn to service debts, both the President of the Senate, Ahmed Lawan, and the Speaker of the House of Representatives, Femi Gbajabiamila, urged Nigerians to focus on what the loans would be used for.

They both described borrowing as a natural option when revenue is low and assured Nigerians that the National Assembly would ensure all monies borrowed must be used for the capital projects they were slated for.