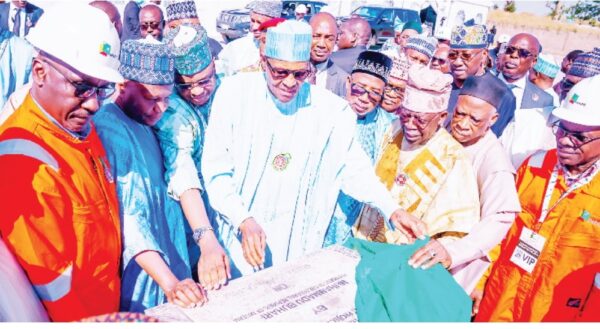 The President, Major General Muhammadu Buhari (retd.), on Tuesday, flagged off the commercial production of crude oil and gas from the $3bn Kolmani Integrated Development Project.

Located along the fields of Gombe and Bauchi, the Kolmani project, with Oil Prospecting Licence 809 and 810, lie in the Gongola Basin of the Upper Benue Trough, straddling the two northern states.

This came as the Nigerian National Petroleum Company Limited revealed that it had identified several drillable prospects in the area, as it noted that it was also making an oil exploration re-entry into the Chad Basin.

In his address at the event, Buhari said the Kolmani River field attracted $3bn worth of investments despite the lack of appetite in the oil sector in recent times.

He said, “Considering the landlocked location and the huge capital requirement, the economics of the project is a challenging proposition.

“Consequently, from the onset, I instructed NNPC Limited to utilise and leverage their vast asset portfolio across all corridors of its operations to de-risk the project to attract the much-needed investment. I have directed NNPC to continue along these lines.

“It is therefore to the credit of this administration that at a time when there is near zero appetite for investment in fossil energy, coupled with the location challenges, we are able to attract investment of over $3bn to this project.”

Buhari described the ceremony as important in the economic history of Nigeria, “as we move closer to production of oil and gas in the Upper Benue Trough, specifically, the Kolmani River oil and gas field, straddling Bauchi and Gombe states.”

He added, “This is indeed significant considering that efforts to find commercial oil and gas outside the established Niger Delta Basin were attempted for many years without the desired outcomes.

“However, the successful discovery of the Kolmani oil and gas field by NNPC and her partners has finally broken the jinx record by the confirmation of a huge commercial deposits of hydrocarbons in Kolmani River field.”

He said the discovery had emanated from the Federal Government’s charge to the NNPC to re-strategise and expand its oil and gas exploration footprints to the frontier basins of Anambra, Dahomey, Sokoto, Benue trough, Chad and Bida Basins.

He said similar activities across the other basins were currently actively ongoing.

“We are pleased with the current discovery of over one billion barrels of oil reserves and 500 billion cubic feet of gas within the Kolmani area and the huge potentials for more deposits as we intensify exploration efforts,” the President stated.

He added, “It is good to note that the discovery has now attracted investment for an end-to-end integrated development and monetization of the hydrocarbon resources.

“As a fully integrated in-situ development project comprising upstream production, oil refining, power generation and fertiliser, the project promises many benefits for the nation. This includes but not limited to energy security, financial security, food security as well as overall socio-economic development for the country.”

Buhari said he had engaged the governors of Bauchi and Gombe states, and both had given him assurances of their unwavering commitment and willingness to ensure support and cooperation in the localities as the activity affected the local populations

“I urge the NNPC Ltd, NNDC (New Nigeria Development Company), and their strategic partners to ensure all lessons learnt from our years of experience as an oil-producing nation are utilised to ensure harmonious relationship with the local communities,” Buhari stated.

This came as the northern governors called on the Nigeria Upstream Petroleum Regulatory Commission to ensure the quick conversion of the Oil Prospecting Licence of the Kolmani field to an Oil Mining Licence.

On the discovery of other drillable prospects in the area, the NNPC explained that this was achieved after it drilled oil in Kolmani.

In an explanatory note, the company said, “Using state-of-the-art hydrocarbon derisking technologies, including magnetotelluric technology, air-borne based stress field detection technology and micromagnetic analysis, among others, FES went into an aggressive exploration to achieve commercial discovery in the (Kolmani) basin.