Battle For WTO Top Job: A Win-Win For Women 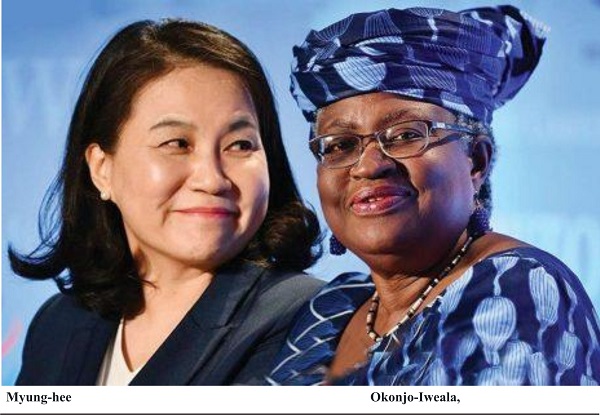 As the selection process for a new Director General of the World Trade Organization (WTO) gradually heading for the official announcement, one thing is certain. No matter who picks the plum job, it’s a win-win situation for the women-folk. For the first time in the history of the organization, a woman will be calling the shots.

At the end of the third selection process, two strong and powerful women who have served their nations in different capacities, emerged finalists, with Nigeria’s Okonjo-Iweala, who already got support from 104 member countries out of 164, while Ms Yoo Myung-hee of Korea, who enjoys support of the United States of America, is still very much in the race.

A global finance expert, economist and international development professional with over 30 years of experience working in Asia, African, Europe, Latin America and North America, Okonjo-Iweala currently chairs the board of Gavi, the Vaccine Alliance. Since its creation in 2000, Gavi has immunised 760 million children globally and saved 13 million lives. The former Nigeria’s finance and foreign affairs minister also sits on the Boards of Standard Chartered PLC and Twitter Inc.

She was recently appointed as African Union (AU) Special Envoy to mobilise international financial support for the fight against COVID-19 and WHO Special Envoy for Access to COVID-19 Tools Accelerator. A skilled negotiator, she has brokered numerous agreements, which have produced win-win outcomes in negotiations. She’s highly regarded as an effective consensus builder and an honest broker, who enjoys the trust and confidence of governments and stakeholders.

Okonjo-Iweala served as a two-time minister of finance between 2003-2006 and 2011-2015 and briefly acted as foreign minister in 2006 – the first woman to hold both positions. She distinguished herself by carrying out major reforms, which improved the effectiveness of the two ministries and the functioning of the government machinery. She had a 25-year career at the World Bank as a development economist, rising to the number two position of Vice President and later as Managing Director (Operations).

The 66-year-old is a firm believer in the power of trade to lift developing countries out of poverty and assist them to achieve robust economic growth and sustainable development. As Nigeria’s finance minister, she was involved in trade negotiations with other West African countries and contributed to the overhaul of Nigeria’s trade policy enabling it to enhance its competitiveness. She has closely followed developments at the WTO, as she believes that a strengthened multilateral trading system is in the interests of all countries, particularly least developed and African countries.

The renowned author is the first female and African candidate to contest for the presidency of the World Bank Group in 2012, backed by Africa and major developing countries in the first truly contestable race for the world’s highest development finance post.

A reformed mind for the WTO, Okonjo-Iweala spearheaded negotiations with the Paris Club of creditors that led to the wiping out of 30 billion dollars of Nigeria’s debt, including outright cancellation of 18 billion dollars. In her second term as finance minister, she was responsible for leading reform that enhanced transparency of government accounts and strengthened institutions against corruption, including the implementation of Government Integrated Financial Management System (GIFMS), the Integrated Personnel and Payroll Management System (IPPMS) and Treasury Single Accounts (TSA).

Meanwhile, Myung-Hee is the first female Trade Minister for the Republic of Korea. She has been an innovator, negotiator, strategist, and pioneer in her 25-year career in trade, devoting her career to progress in the multilateral trade arena.

In her early days in 1995, she took charge of WTO affairs in the Korean Ministry of Trade Industry and Energy, and later as Korea’s key FTA strategist and, recently, negotiator of the Regional Comprehensive Economic Partnership (RCEP), the Korea-China FTA and the critical Korea-U.S. (KORUS) FTA renegotiation, among other trade initiatives.

Minister Yoo’s belief in the importance of the multilateral system and its constant renewal derives from Korea’s position as a major beneficiary of the open trading system represented by the General Agreement on Tariffs and Trade (GATT) and WTO. Her life in Korea has been defined by Korea’s increasing prosperity and growth in the multilateral trading world. She knows that development can happen in this framework and has first-hand experience in how to effectuate mutually beneficial change and development.

Myung-Hee has worked with countries spanning all levels of development, in various WTO and FTA negotiation settings as well as through her work experience in the APEC Secretariat (2010 to 2014) and the Korean Embassy in China (2007 to 2010).

No doubt, having a woman sit at that WTO table will further increase negotiation on the reduction or elimination of obstacles to trade (import tariffs, other barriers to trade) and agreeing on rules governing the conduct of international trade including antidumping, subsidies, product standards, which Nigeria will solely benefit from.

Part of the responsibilities of the WTO is to set and enforce rules for international trade, to provide a forum for negotiating and monitoring further trade liberalisation, resolve trade disputes, increase transparency of decision-making processes, cooperate with other major international economic institutions involved in global economic management, and helping developing countries benefit fully from the global trading system.

To a large extent, having two women as finalists is major boost to global campaign for girl-child education and literary empowerment. When a girl child is denied access to education, it implies making her a dysfunctional member of the society. While an educated girl is more likely to become involved in the workforce and bring economic stability to her family and community, studies have proven that women invest around 90 per cent of their income into their families and communities, thus reducing poverty and improving health, safety, and education for everyone. So, whether it’s Okonjo-Iweala or Myung-Hee that finally gets the job, it would be a victory for women.

Speaking on the race for WTO DG, former Chief Information and Evidence Support Section at the United Nations International Criminal Tribunal for Rwanda, Ayodeji Fadugba, said the emergence of two highly qualified female candidates is a heartwarming development for women around the world.

“For many years, multilateral institutions have been accused of having few women in the most powerful positions. In some cases, they have made efforts at narrowing the gap but women are still stuck in mid-level management positions. The endorsement of Okonjo Iweala of Nigerian origin, by African countries and most of the countries in Europe is testimony of the world’s confidence in her capacity.”

Fadugba noted that while serving as Minister, Okonjo-Iweala worked hard to stabilize an economy, which had been left comatose and debt ridden after decades of Military rule.

“She preached transparency and accountability in government finances and worked to put in place structures of accountability and fiscal responsibility. It is expected that her dual expertise in international and national finance put her in a unique position to be an effective leader of the WTO, where the interests of developed countries are not always congruent with those of the developed world. It should afford the world an opportunity to look at the effect of multilateral trade agreements on women so that such agreements are based on more inclusive gender planning within constituent member states.”

She added, “In Nigeria and much of the world, we expect that based on her experience of the effects of gender discrimination on economic outcomes for women within national boundaries, she will be in a unique position to ensure that gender perspectives are reflected in state agreements. It is important that the benefits of trade accrue to men and women equitably if the WTO is to be a sustainable and resilient organization.”

An activist and legal practitioner, Julie Odigie-Oyegun stressed that Okonjo-Iweala’s emergence in the finals is a proof that women can and should compete for leadership and the best jobs when we have the credentials and experience to excel.

“I am more impressed that the final contest is between two non-Western women in terms of ethnic origin. And that they and another Kenyan woman went for such a high-profile position is testament to the growing aspirations and confidence of women of colour and recognition of their excellence by the world. There are irreparable cracks in the glass ceiling at last”

As the WTO makes decisions on a consensus basis and a lack of American support for any of the finalists could mean delays in picking the new DG. Hence, if the WTO members are unable to select a leader by consensus, a vote requiring a qualified majority could be the last resort.

Odigie-Oyegun observed that what America fears is a rapprochement among member states to get the WTO out of the deadlock caused primarily by America.

“What would be really interesting is to see whether the South Korean will ditch the Americans and pull out of the race; they are merely using her for this controversy. One would like to see if feminist solidarity is real and global when the stakes are this high. Clearly, it didn’t move US Supreme Court nominee Judge Amy Coney Barrett now of SCOTUS infamy, sworn in by the infamous Clarence Thomas no less, these engineered ironies never cease to resonate, even with cynics.”

For Gender/Development specialist and Executive Director of Project Alert on Violence Against Women, Josephine Effah-Chukwuma, Okonjo-Iweala’s winning particularly will be a landmark victory for African women and black women globally. “I expect her to do what she is best known for, adding value to the vision and mission of the WTO – regulation of international trade between nations. Trade is an instrument that is very important to developing countries such as Nigeria.”

Previous Marine Pollution Should Be Addressed From Producing Companies, Coastal Communities
Next How To Start A Real Estate Business In Nigeria