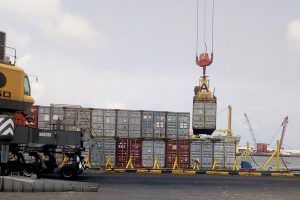 By Kenneth Jukpor
A group known as Concerned Maritime Operators has condemn the illegal revocation by the Nigerian Ports Authority (NPA) of the leases granted a number of its members’ companies to conduct jetty and barging operations along the stretch of waterways across the Oshodi-Apapa Expressway from the main facilities of the Tin-Can Island Port Complex (TCIPC), Apapa, Lagos State.

The group in a press statement signed by the CMO Coordinator, Mr. Oladapo Oduneye, noted that the operational licences of the six affected indigenous companies granting each of them their respective one-year leases are all still valid, having commenced between January and March 2021.

Lamenting that efforts of the affected companies, individually and collectively to engage NPA on the matter have been futile, the group stressed that barge operations have contributed immeasurably in ameliorating the hitherto intractable gridlock that haunted the Lagos ports access roads by moving huge volumes of cargoes safer, cheaper and more conveniently via the waterways, contributing immensely to facilitating the Buhari administration’s ease-of-doing-business policy.

“The action of the NPA is high-handed and at best a travesty against justice, because the various leases, which are all fully paid upfront, had only gone a negligible fraction of their respective tenures before revocation hammer hit them.”

“This arbitrary action of the NPA saw the wanton destruction of the structures, equipment and other investments belonging to the licencees at the lease sites located between the TCIPC first and second gates by Port Novo Creek in a ruthless illegal mission enforced by a joint task force of heavily-armed military and paramilitary personnel mustered and deployed by the Authority.”

“Consequently, no less than six thousand persons employed directly and indirectly by the affected operators have been rendered redundant under the prevailing galloping inflation and insecurity sweeping across Nigeria. The revocation has inflicted huge losses in terms of revoked contracts with foreign investors, painting Nigeria before the international community as an unstable investment destination,” the group said.

The concerned operators said that it is baffling that under the administration of President Muhammadu Buhari, which is geared towards alleviating poverty and boosting local content and financial incentives to entrepreneurs, NPA’s antics are antithetical to gainful legitimate businesses and will throw several persons into the already congested unemployment market.

“We unequivocally state that, in rendering those ill-concieved revocations, the NPA had taken a dim, callous and selfish stand on the issue. Clearly, in giving effect to the conditions in the Licence Agreements signed between the respective licencees and the NPA, the Authority’s revocation orders on our affected members’ leases or Temporary Occupation Licence (TOL) were not informed by strict adherence to the principles of the public interest, but skewed to favour some landgrabbing vested interests set on a course of hostile takeover of a hitherto dormant location that the smart and hard work of our members breathed a new lease of life,” the group said.

“None of our members ever invoked that first clause, and, on the second clause, we firmly believe that a Buhari administration that has consistently supported indigenous entrepreneurs in words and actions will suddenly do a volte-face in this instance. On the matter of the third clause, we vehemently protest that the NPA cannot justifiably claim that it “requires the space for use.” We posit that the action of the NPA in effecting the premature revocation of our members’ leases on the said space is without due processes, and quite unconstitutional,” the group added.

Recall that Section 44 of the 1999 Constitution of Nigeria, as amended, on the matter of “Compulsory Acquisition of Property”, states in parts: “(1) No moveable property or any interest in an immovable property shall be taken possession of compulsorily and no right over or interest in any such property shall be acquired compulsorily in any part of Nigeria except in the manner and for the purposes prescribed by a law that, among other things -(a) requires the prompt payment of compensation therefore and (b) gives to any person claiming such compensation a right of access for the determination of his interest in the property and the amount of compensation to a court of law or tribunal or body having jurisdiction I’m that part of Nigeria.”