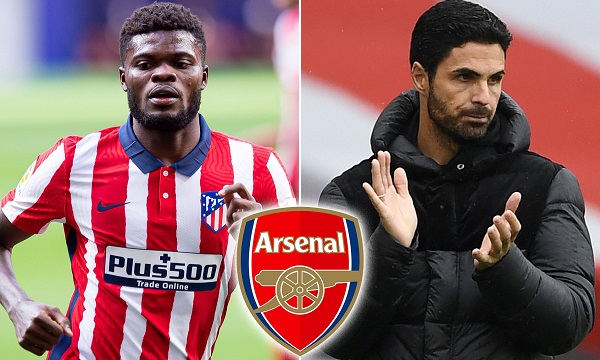 Atletico Madrid star Thomas Partey is set to quadruple his salary after agreeing personal terms with Arsenal over a £250,000-a-week deal at the Emirates, reports metro.co.uk.

The report claims that the 27-year-old would join the Gunners in a dramatic deadline day switch from the Spanish capital to north London. Partey has been a leading target for Mikel Arteta throughout the window, with the Gunners knowing that they only needed to trigger his £45m release clause to push through a deal.

However, the club have been desperately trying to balance the books before moving for Partey and the club are expected to offload the likes of Sead Kolasinac, Sokratis and Matteo Guendouzi before the window closes.

That has convinced the club’s board that they can finance a move for Partey and given the midfielder’s situation he has already agreed a contract with the club.

According to the Guardian, Partey will earn around £250,000-a-week with the Gunners and that represents a significant boost on his £60,000-a-week wages at Atletico. It’s claimed the club have also agreed to pay Partey’s representatives a seven-figure sum. Given Arsenal have spent four seasons outside the Champions League, it is a significant investment in the midfielder, who has just turned 27. Arsenal had hoped to sign Lyon playmaker Houssem Aouar but the Frenchman decided to stay with the club for an extra season.

The club announced his decision on Friday, leaving Arsenal with 72 hours to switch their attention to Partey.
Partey was expected to undergo a medical in Madrid yesterday.

Apart from Partey, Arsenal have also signed two youngsters on transfer deadline day. According to Chris Wheatley, Arsenal have completed deals for centre-back Omar Rekik and striker Nikolaj Duus Moller. Rekik is set to cost the Gunners around £900,000 and a fee for Moller is roughly £433,000.

The centre-back heads in the opposite direction to Matteo Guendouzi, who has joined Hertha on a season-long loan.

Dutchman Rekik first joined Hertha from Marseille in 2017 and is set to join up with the Gunners’ academy.

The tall forward has been likened to Sweden legend Zlatan Ibrahimovic due to his ability on the ball despite his height.

Moller spent 18 months in Italy with Bologna before returning to Malmo in January 2020, the club he first joined when he was 12.

The Swede, 18, is also set to join up with the Arsenal academy initially. Arsenal are yet to officially