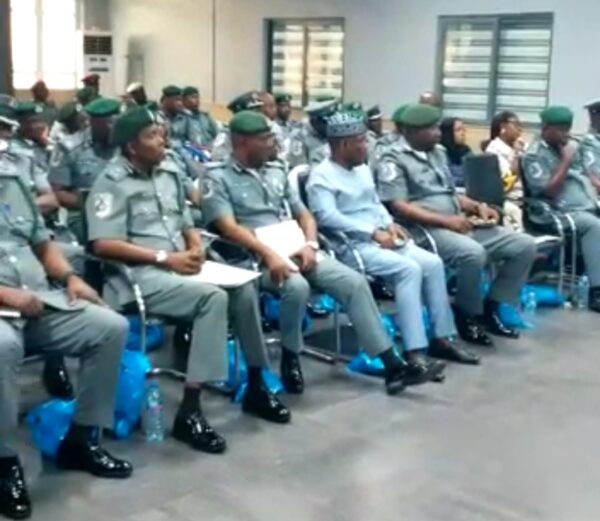 The Apapa Area Command of the Nigeria Customs Service in collaboration with the Independent and Corrupt Practices Commission (ICPC) and the Anti-Corruption and Transparency Unit (ACTU) on Thursday held a sensitization program for it’s officers tagged; “Transparency and Accountability in Public Office”.
Speaking at the event which was attended by senior officers of the command, the Area Controller Apapa Command, Compt Yusuf Malanta said it was imperative to remind the officers and stakeholders of the need to be transparent and accountable for their actions and inactions in the workplace as well as every sphere of life.
According to him,one of the greatest achievements of the service is  automating the business of customs by the Comptroller General, Col Hameed Ali (Rtd). He said that this has encouraged accountability and transparency.
“As part of the CGC’s reform strategy, the Service is compelled to adopt diverse methods to ensure transparency and accountability, by automating exiting processes and procedures.
“Some of the technology deployed include but not limited to; the use of seamless port clearing procedures which differentiates between the trader and customs zones respectively.  The use of Risk Management integrated tool for selectivity, based on the integrity of the importation.
“The use of artificial intelligence to select and assign examiners for cargo inspection.
The use of Non-Intrusive Inspection Technology (NIIT) to conduct examination using High-Definition Multimedia Interface (HDMI) to determine the content of a cargo and analyse images accordingly.
“The use of Trade Hub Portal (NTH) to disseminate information concerning import/export and transit trade.
The use of e-auction sales for auctioning seized and condemned goods. This technology is deployed to suit our trade operating environment to encourage compliance in the trade supply chain and economic growth while increasing transparency and taking advantage of new technologies.
“As the lead agency in trade facilitation reforms, the Service is committed to constantly reinventing its strategies and adapting to present day challenges through partnering with other relevant government agencies in the port for effective ease of doing business which has yielded unmeasurable improvements in trade efficiency.
“I would like to use this opportunity once again to commend the existing and sustained synergy with our stakeholders and government operatives in Apapa Port.
“The need for synergy as a stimulant in collaboration and coordination cannot be overemphasized. Therefore, we are all enjoined to consolidate and foster this enviable relationship which is indeed a great example worthy of emulation” he said
Compt Malanta urged the senior officers of the command to go back to their terminals and units and transfer the knowledge they have received, so that other officers can be informed.
He charged them to groom and mentor lower ranked officers to be their successors in the service.
“What kind of culture are we imbibing into our lower Cader officers. You need to add value, no matter how small your area is, you should at least have a change of culture, attitude and mindset of your officers, share your views with other stakeholders around that area.
If you have 20 officers, try and have confidence in at least fifteen of them without any sentiment” he said
Also speaking, Resident Commissioner, ICPC Lagos State, Mr Kabir Elelu commended the Apapa Command of customs for standing up to be counted in the fight against corruption.
According to him, the ICPC has noted how Apapa Customs has been striving to implement the policies put in place by the federal government in order to ease transactions at the ports.
ICPC according to him is also working tirelessly with the Port Standing Task Team (PSTT) which was setup by the federal government to ease and implement the ease of doing business at the port.
Mr Elelu noted that the  National Ethics and Integrity policy which was adopted by the Federal Executive Council (FEC) in 2020,is an Initiative of the ICPC.
“It is an initiative of the ICPC. The idea behind it is that, the state at which Nigeria is today in regards to the decadence and corruption is as a result of the moral decadence in the society.
“These values of yesteryears have been eroded and that is why we came together to initiate this policy which was adopted by the federal government. It has seven core values among which is personal responsibility, integrity, national unity, professionalism, human dignity, patriotism and nationalism.
The whole idea is that every Nigerian and foreigner doing business in Nigeria is expected to imbibe these values and preach it” he said
The Commandant, Nigerian Army School of Intelligence,who was represented by Major M.G Joel noted that one of the challenges bedeviling intelligence collaboration among government agencies today is inter-agency rivalry.
According to him, some operatives are overzealous and unmindful of the boundaries and duties of others, this he said is caused by inferiority complex.
According to him, Inter agency rivalry has negative effects;It kills the spirit of cooperation amongst government agencies, it Kills their moral and lead to breakdown of law and order,It erodes people confidence in their capability, it dampens government image and lead to clashes,It discourages investors, encourages espionage and so on
On his part, former President of National Association of Government Approved Freight Forwarders (NAGAFF) Dr Eugene Nweke noted that customss need people’s support and political support in line with the 3Ps of the World Customs Organization (WCO) in order to achieve success as they cannot do it in isolation.
Dr Nweke said that the various innovations and modernizations embarked upon by the service must be well interpreted and disseminated to younger officers who are mostly on the field, adding that whatever the junior officers do would rob-off on the senior officers.
While urging the leadership of customs to bequeath well trained and discipline officers to the service when they retire, he said “There are various laws in Nigeria that needs to be harmonized just like China did in 1949 where so many of it’s laws were overlapping. The CEMA has not provided an avenue for customs officers to perform at their optimum..
Share