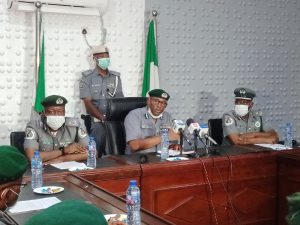 Meanwhile, despite the though economic times ocassioned by the COVID-19 pandemic, Apapa Command has collected the sum of N227.3 billion in the first half of this year.

The Customs Area Controller (CAC), Apapa Command, Comptroller Mohammed Abba-Kura made this known during the 2020 half year report of the Command earlier today.

His words: “Apapa Command is always ready and willing to support export. Since my arrival here in March 2019, I have continued to stress that the Command under my leadership would encourage legitimate trade whether import or export.”

“As long as the laid down rules and regulations are followed, nobody involved in export trade would have an issue with Customs in Apapa.”

On the revenue collected, the Area Controller stated that it was a result of collective resolve to enforce the Federal Government fiscal policy measures, adding that the result was the increment seen in the revenue generated for the first half of 2020 compared to the 2019 sum.

He expressed delight that inspite of all challenges, the Apapa Area Command maintained its tempo in ensuring that maximum revenue was collected in addition to trade facilitation and suppression of smuggling.

“There has been steady improvement in revenue collection all through the first half of the year, except for the month of May which recorded a decline of about N3.5billion when compared to the year 2019.”

The Area Controller also revealed that about 10 officers at the Command tested positive for COVID-19, adding that they have all recovered.

“They were isolated at the isolation centre for two weeks. We thank God and commend Lagos State government and the medical doctors at Lagos State Teaching Hospital (LUTH). They took good care of these officers and they are all okay at the moment. Some of them are even in this auditorium,” he said.

The Controller also revealed that the Command generated about N52.369 billion from export trade and N227.347 billion revenue between January and June 2020.

According to him, the total goods exported from Nigeria via Apapa stood at 1.642 million tonnes with Free On Board (FOB) value, adding that the exported goods include; agricultural products mineral resources and steel bars amongst others.

On seizures recorded in the first six months, he stated that the command has seized a total of 142 containers of various items worth N15.904 billion.

Some of therthe seizures were exotic vehicles, including Rolls Royce 2018 and 2019 Lamborghini Huracan Sports Car.