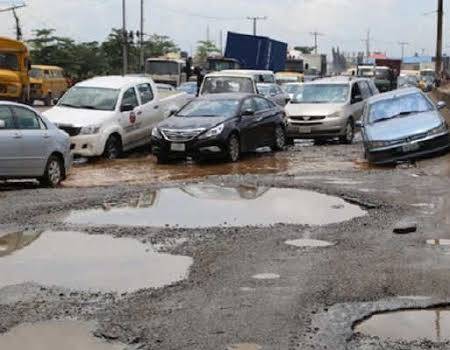 Transport experts have posited that 80 per cent of the paved Nigerian roads has expired due to bad engineering designs, lack of maintenance, environmental factor and absence of synergy among the three key federal ministries saddled with the responsibility of road activities in the country.
They are: Federal Ministry of Works, Federal Ministry of Transportation and Federal Ministry of Environment.
In essence, it means that only 20,000 km out of the 60,000 km paved road network in Nigeria is considered motorable.
Statistics has it that Nigeria has about 195,000km of road network out of which a proportion  of about  32,000km are federal roads while 31,000 are state roads. Out of this, only 60,000km are paved while 135,000km roads network are un-tarred.
Speaking at a recent forum of the Chartered Institute of Transport and Administration(CIoTA)Nigeria, Dr. Taiwo Salaam of School of Transport and Logistics, Lagos State University,LASU posited that “Over 80 per cent of Nigerian roads has expired”, a position corroborated and accentuated by the former Commissioner for Transportation in Lagos State, Dr. Kayode Opeifa and many other participants.
He attributed the failed road system to bad design and  deployment of non-professionals in wrong ministries for unprofessional construction.
“Can the Federal Ministry of Work tell us how many countries in the world have Ministry of Works constructing road that is successful?  And how many countries do we have the Ministry of Transportation build roads that fail? The point I am making is that in South Africa, UK, Germany and United States, it is the transport sector that construct the roads because that is where you have the professionals that can make the roads safe.
“As long as the Federal Ministry Work,  Federal Ministry of Transportation and  Federal Ministry of Environment  are operating in silos the way they are doing now our roads will not be safe”, he noted.
Calling for the restructuring of the ministries to achieve efficiency and performance, Opeifa stated that there is urgent need for policy reviews, saying “there are policies but there has  to be policy reviews and update. We have policies but how many of them are being enforced?”
Speaking on the role of the Federal Road Safety Corp(FRSC), he lauded them for engaging on a lot of work on the highway but they have to look for a way to strengthen capacity in the states.
He however further stated, “They have a lot jobs that are not being done well. Let’s take driving license as a case in point.
Opeifa,who was the Executive Vice-Chairman of the Presidential  Task Team on the Restoration of Law and Order in Apapa Port emphasized that the issuance of driving license is not even the responsibility of FRSC; it is the responsibility of the state government.
“Under the law of Federal Republic of Nigeria, it is under municipal law. It used to be under the local governments. All that FRSC has to do is to handle data capture and printing. But unfortunately, FRSC has refused to surrender this to states rather states were made to surrender to them,” he declared, recalling that, “When all states surrendered  in 2010, Lagos refused to surrender until we got our equipment in 2012  and we registered more number of people in six months more than the FRSC had registered in two years.”
Appealing to transportants to help rescue the nation at the next National Council on Transport(NCT) meeting and present the need  to  review all the past resolutions at  the council for implementation.
According to him, they had resolved that “States must establish ministry of transportation, it must establish a motor vehicle administrator agency and they must strengthen their driving licensing authority;not FRSC. We are only giving them unnecessary means of survival.”
Opeifa called for road accident investigation body,asking,”how many accident investigation do we do?  When accident takes place don’t tell the media because it only serves the purpose of breaking news which could jeopardize the investigation mission.
Sharing his experience while serving as commissioner in Lagos, he said, “In Lagos, many of the tankers fall due to bad roads. I investigated all accident tankers on the road when I was Commissioner for Transport in Lagos State. If it were another country we should be suing the Federal Government and the Federal Ministry of Works for dereliction of duty; not maintaining the roads.
“Federal Ministry of Works should take responsibility for the failed roads and their designs . And the reasons you have absurdities on the road is because the ministries are working in silos. It is the job of transport experts to ensure that there is good roads not the engineers.For instance, there is an accident prone bridge on Ojuelegba, Lagos. The bridge is bent. A trailer cannot climb and bend at the same time. The same thing is happening at Otedola bridge. Our road designs are bad and not safe.  The way we construct roads is not safe.
“Our ministry of works are busy building roads but the roads lack road signs because they are not built by ministry of transportation. The roads builders do not consider the circumstances of the road user because they are built by somebody who does not care how the road is used. In other countries of the world, ministry of transportation builds the road but in Nigeria, Federal Ministry of Works build and does not care how the road is used or investigate the accident on the road.”He added.
Share