6 Months After Flag-Off By Buhari, Bonny Deep Seaport  Yet To Get FEC Approval 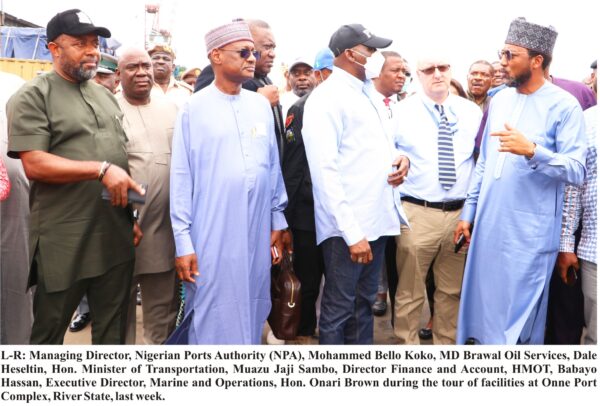 The proposed multi-million dollars Bonny Deep Sea port in Rivers State is yet to secure the approval of the Federal Executive Council (FEC) despite its flag- off earlier this year in March by President Mohammadu Buhari under the leadership of Rotimi  Amaechi as Transportation Minister.

The project was said to have had a temporary setback occasioned by the change in the initial location which has problem of existing pipelines buried underground across, among other issues.

During a tour of the Onne Port Complex and Rivers Port Complex in Port Harcourt, River State, last week, by the Minister of Transportation,

Engr. Muazu Sambo, the managing director of Nigerian Ports Authority(NPA),Mr. Mohammed Bello-Koko affirmed that the promoters had done the Outline Business Case(OBC) and Financial Business Case(FBC) which NPA and other relevant approving authorities have seen but another location has been identified which has a natural draft of over 17 metres.

Recall that the Bonny seaport, the Port Harcourt to Maiduguri rail line and a new Railway Industrial Park in Port Harcourt, all combined with a value of about $3.2billion, were flagged-off in March this year by President Muhammadu Buhari.

According to experts, this development however is a paradigm shift  from the established project development approval and implementation procedures, where approval precedes official flag-off.  But in the case of Bonny Deep Sea port, not even the absence of a clear location could dissuade its flag-off.

It is also not on record that there was any conditional approval before the ceremony, thereby laying credence to the claim by some industry professionals that any project in Nigeria associated with the infamous Chinese construction firm undermines due process.

“He just talked about the short, medium and long term strategic plans. For us in NPA and working with the Ministry, the development of a deep sea port in this part of the country is very key. It also means that you now have two deep seaports in the West. Lekki is already gearing up for take- off, and then you have the Badagry that has been approved by FEC and then we hope that the Minister will get approval for Bonny deep seaport  soon and that means we have deep seaports at different locations of the country. I do hope that within the life-time of this administration, the Bonny deep seaports will gain approval for take- off,” he added.

The project scope includes construction of a breakwater, revetment, container berth, general goods berth, dredging of the access channel and turning basin, construction of office buildings and warehouses. The new port with a draught of 17 metres will have a terminal capacity of 500,000 TEUs per annum and 100,000 DWT general cargo berth.

The port project will be boosted by the rehabilitation of the Port Harcourt – Maiduguri rail-line with a branch at Elelenwo in Port Harcourt, heading to Dere, Bodo and terminating in Bonny.

While Bello-Koko described the Bonny Deep Seaport project as a “game changer” that would significantly transform the socio-economic landscape of Nigeria based on its multiplier effect, the Minister of Transportation, after the assessment of the on-going re-construction work at    Rivers Ports  and Onne Ports expressed the hope that they would guarantee  massive job opportunities, better welfare and improved living conditions for Nigerians.

Assuring that the repositioned Onne Port will maximize its huge potentials in export and import trade, he said the 3 days fact-finding tour was to ascertain why the eastern ports are not performing at maximum capacity

“Part of the reason why I’m here is to look into why the Rivers Ports are not working. Whatever the challenges are, we will address them. I will discuss with stakeholders and we will come up with short term, medium term and long term plans on how to overcome those challenges and make the ports productive”, Sambo said.

On the issue of the dilapidated access road to the Onne Port, the Minister assured that Sukuk IV will take care of that, adding that he would liaise with his counterpart, the Minister of Works and Housing, Babatunde Raji Fashola to see how  it can be fast-tracked.

The Minister, however, frowned on Terminal Operators who defraud the Federal Government by not complying with payment of the Practitioners Operating Fees, warning that it will no longer be tolerated.

Also speaking at the occasion, the Managing Director, Nigerian Ports Authority (NPA), Mohammed Bello- Koko said government is very serious about the need to increase traffic at the Eastern Ports, so as to decongest the Lagos ports.

At the West Africa Container Terminal (WACT) Nigeria, the Managing Director, Naved Zafa, while briefing the Minister on their facility, said: ” as part of our Terminal upgrade and expansion project, we have acquired sufficient cargo handling equipment at our terminal to improve the efficiency of the port”.

Speaking further, he informed that the  Nigeria Customs Service .has just installed a new scanning machine at the port complex, which was acquired by the Federal Government and inaugurated by the Controller General of Customs, Col.  Hameed Ali (rtd).

According to him, the scanner would facilitate trade, ensure security and drastically reduce the importation of illicit goods by unscrupulous persons, adding that it would reduce dwell time by promoting faster and easier treatment of cargoes.

Previous Gulf Of Guinea: NIMASA Makes Statement, Jails 23 Pirates
Next Still On Why NDI-ENUGU Must Reject PDP In 2023 (Part 2)