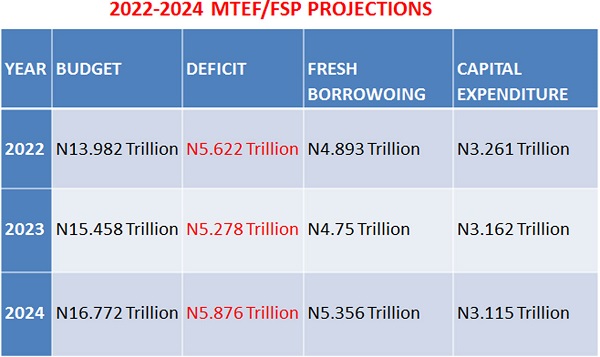 The government regularly talks about fiscal reforms that would see it scaling up spending on infrastructure and channeling more resources to growing the non-oil sector, but translating the intention to action seems far-fetched as the 2022-2024 Medium Term Expenditure Framework and Fiscal Strategy Paper (MTEF/FSP yet reflects old habits.

As of March, the country’s documented debt stock exceeded N33 trillion, raising concerns from different stakeholders, including the Director-General of the World Trade Organisation (WTO), Dr. Ngozi Okonjo-Iweala, on its sustainability.

At the event, global leaders raised concerns about Nigeria’s and other African countries’ debt burdenMinister of Finance, Budget and National Planning, Zainab Ahmed, said the country had no alternative to continuous loan accumulation. The Senate President, Ahmed Lawan, re-echoed the position the same week.

Hence, it may not shock many Nigerians that the new economic projection document is contemplating “fresh borrowings”. What may shock many is the amount and proportion of the planned loans to total spending and proposed capital votes.

The loan estimates are 60 per cent or N5.6 trillion higher than the total N9.4 trillion earmarked for capital projects in the three years. Next year’s estimated capital vote is N3.262 trillion as against N3.162 trillion proposed for 2023 and N3.155 trillion planned for 2024. The amount approved in this year’s budget, which is N4.125 trillion, is larger than what is being contemplated for any of the three fiscal years starting from 2022 even though the government wants to increase total spending.

Next year’s budget, though would be adjusted in line with economic realities before presentation, is estimated at N13.982 trillion. It will increase by roughly 10 per cent trillion to N15.458 trillion in 2023 while the total spending will jump to N16.772 trillion.

The proposed new borrowing is about one-third of the total N46.3 trillion the FG intends to spend between 2022 and 2024 while the capital projects will take just one-fifth of the spending estimates.

The finance minister while presenting the 2022-2024 MTEF/FSP to the National Economic Council (NEC), last week, said it was prepared against the backdrop of global economic recovery, amidst improved vaccination outlook and lower incidence of (COVID-19) infection. Hence, the document, which was endorsed by NEC, assumed the economy is rising from the ashes of COVID-19 with full recovery in sight.

Whereas there is a remarkable achievement of vaccination in different parts of the globe, the World Health Organisation (WHO) said less than two per cent of Africans have received the first dose of the vaccine. At the moment, a new wave driven by a dreaded Delta variant is sweeping across Africa.

“The speed and scale of Africa’s third wave are like nothing we have seen before,” WHO’s regional director for Africa, Dr. Matshidiso Moeti, said. With the recent surge in new cases, there is a renewed air of uncertainty across regional blocs.

As the highly infectious Delta variant sends panic across the globe, countries are relapsing into new restrictions and lockdowns, which economists warn could derail the gradual recovery. The uncertainty, as expected, is driving the dollar, a haven during economic uncertainty, to new highs.

On the strength of the assumption that the economy is on a recovery path, the government has reviewed upward oil benchmarks to 1.88 million barrels per day (bpd) at $57pb for next year. At $57pb and $55pb, the government hopes to scale up production to 2.23 million bpd and 2.22 million bpd in 2023 and 2024 respectively.

The oil production and price assumption between 2022-2023 are more ambitious than this year’s in terms of volume and price. The revised budget signed by the President contemplates 1.86 million bpd and $40pb benchmarks. With the global economy getting used to handling COVID-19, Bala Zakka, an energy expert, said the price target “is reasonable and achievable” while the volumes are not.

“There has been an energy shortage. A lot of industrial clusters had stopped production owing to the COVID-19. Now that the global community understands how to handle the pandemic without necessarily shutting down the economy, the industrial sector will need the power to continue to produce. This means the prices are realistic. I don’t see the price coming down below $55 pb,” he said.

Zakka said achieving 2.22 million bpd (a combination of crude and condensate) in the next two years would depend on the perception of the Oil Producing Exporting Countries and their allies (OPEC+) about demand and supply. In the event Nigeria’s quota is less than the target, he said, the country would be left with the option of presenting “its unique economic situation” for OPEC+ consideration.

With the restiveness in the Niger Delta relatively brought under control, he said, the country’s crude production is not adversely affected by the local security concern except the scaremongering, which could discourage expatriates coming into the country.

The MTEF/FSP document says the non-oil revenue performance has been impressive and heading in the right direction” but noted with concern that “PMS under-recovery and the cost of securing oil pipelines are however weighing on down on oil revenues”.

The naira has been traded in wide swing at the Nigerian Autonomous Foreign Exchange (NAFE) market since its adoption for official transactions even as experts have suggested that the local currency is overvalued. But the medium-term projection is N410.15/$. While a higher exchange rate may translate to more money for the government, the underestimation could be a major distortion for official foreign exchange-denominated transactions.

Last week, the naira closed officially at N411.25/$. With the reserves losing as much $2 billion in the first half of the year and still falling daily, the Central Bank of Nigeria (CBN)’s capacity to intervene in the market to save the naira is weakening. The exchange rate at the parallel market, which a fairly valued naira could close up with, jumped to N502/$ last week as illiquidity continues to dictate the trading.

The inflation rate has not eased reasonably in the past three years. It hit 18.17 per cent in March before retracement that saw the figure dropping by 0.05 percentage point in April, albeit the disbelief. In the 2022-2024 MTEF/FSP, the government expects inflation to retreat to 13 per cent next year, 11 per cent in 2023 and 10 per cent in 2024.

Inflation has consistently exceeded official projections in the past few years. It is currently 2.93 percentage points above the government’s estimated 15 per cent. Last year, the Budget Office projected an inflation rate of 13.2 per cent while the CBN adjusted its forecast to 14 per cent by the third quarter whereas the figure soared to 15.75 per cent at the close of the year. With the protracted insecurity in different parts of the country and the heightened currency crisis, some economists said the headline inflation would be steeper in the coming months. These concerns raise questions about the level of diligence put into the MTEF/FSP projections.

Previous PIB: Dangote Refinery, Others To Buy Crude In Naira
Next Debt Service Burden, Subsidy May Push Deficit Above N7tr This Year

The naira slumped further to 523/$ at the parallel market on Wednesday, a day after …